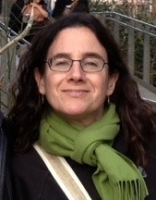 Martha Schlitt grew up in Washington, DC.  She received a BA in American Studies from Barnard College, studied painting in New York and worked at Ronald Feldman Fine Arts.  She completed the Post-Baccalaureate program at the School of the Art Institute of Chicago and was awarded a fellowship at the University of Illinois at Chicago where she received an MFA in Studio Art.
After living and working in San Francisco for 17 years, Martha relocated with her husband Mark Takiguchi and their two children to Portland, Oregon.
She has exhibited nationally, received numerous juror's awards, is a recipient of an ArtCouncil grant and was nominated for a Eureka Fellowship from the Fleishhacker Foundation.  She currently works at Reed College.
Loading...